Yesterday I revisited the Cleveland (North Yorkshire, UK) landscape where my historical novel, ‘Tom Fleck’, opens. Readers will recall that Tom lives in a crumbling cow byre, on the edge of a marsh, close to the southern bank of the tidal river Tees in the year 1513. Those lower reaches of the Tees have changed dramatically since Tom Fleck wades across carrying his wounded dog, Meg.

In Tudor times the region was dominated by a meandering river, swept twice daily by North Sea tides. On either bank broad marshes and alder carrs enclosed the river’s winding course. It was here that Tom collects eggs of wild duck and one day finds a lost gold ring that would transform his life. Three hundred years later, that wild place changed.

Industrialists in the growing town of Stockton-on-Tees needed better access for ships. The river had islands and shifting sandbanks that could could only be navigated during high tide. Ships could take as long to negotiate the few miles between the Stockton and the sea as it took to sail the 280 miles to London.

The first cut was made in 1810. A 220 yard excavation across the neck of the western meander saved 2.5 miles! In 1831 the eastern meander was cut through and the river became almost straight. To narrow and deepen the river iron works slag was dumped along the river banks. The tide could now sweep in from the sea twice a day and flush the new channel. Stockton thrived for a few more years until the new town Middlesbrough took over dominance at its plcae on the estuary. The wild land Tom Fleck roamed across became covered in industry.

Here is the old river bed photographed from Portrack (the area is now a nature reserve):

Old bed of the Tees

On the far bank, before his fight with Mark Warren, Tom Fleck had quietly watched a seal take a salmon.  Just here, he halted after wading the river and waved farewell to Mary.

The Tees now has a barrage just upstream from the nature reserve: 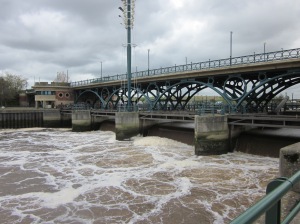 And beyond the barrage we can see the high bridge that carries the A19. The site of Tom’s byre is now buried beneath the right hand approach.

Tom Fleck would not know the place now.  You can read his story on paper or ebook at Amazon and Smashwords.

I once bred Beveren rabbits in all colours. Today, I'm an enameller who works with a kiln, fusing pictures in glass onto copper. On Amazon is my novel, 'Tom Fleck', set in the North of England of 1513 - the year of Flodden. A sequel to 'Tom Fleck' is 'The Black Caravel' published in 2016. My anthology of poems came out in 2015: 'Wandering About.' Recently I published memoirs of my time in the Merchant Navy: 'The Best of Days' and 'You'll See Wonders" I've a blog of poems, stories and art at: https://1513fusion.wordpress.com/
View all posts by Harry Nicholson →
This entry was posted in blog and tagged A19, Middlesbrough, nature reserve, Portrack, Stockton on Tees, Tees Barrage, Tees Cut, Tom Fleck. Bookmark the permalink.