Calling the night down.

The last two weeks in November I spent alone on the shores of Northumberland opposite Holy Island (Lindisfarne). I’d hoped for wild weather so that I could press on with writing a sequel to my novel ‘Tom Fleck’. I certainly had days when gales hammered at the windows and rain fell in sheets but, as you’ll see, I had the most wonderful days of sunlit distraction. 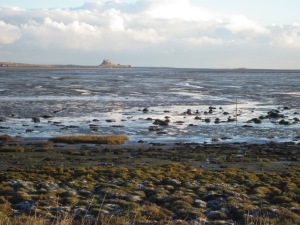 Between my refuge and Lindisfarne is this shallow bay. Miles of mudflats and sand bars that are covered at high water.

The rising tide brings in wildfowl that feed on the sea grass. Here is a company of wintering Pale Fronted Brent Geese; family groups of migrants from Spitzbergen. 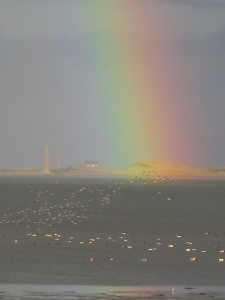 And this is why I came away with a mere 7,500 words of the sequel to ‘Tom Fleck’. As the weather swept through, I spent hours gazing instead of writing. 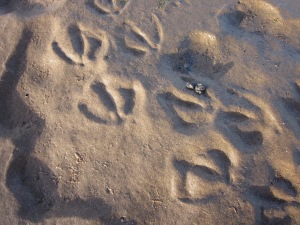 Gazing at footprints on the shore. 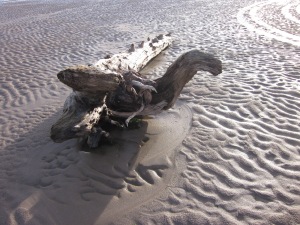 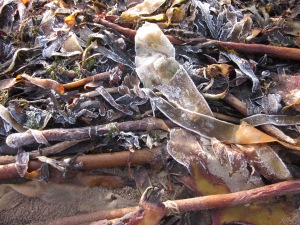 And frost on stranded kelp. 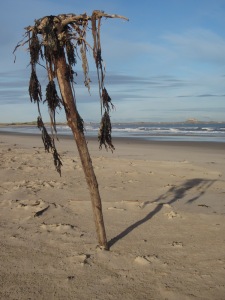 And pagan totems so near to the cells of St Cuthbert and St Oswald. 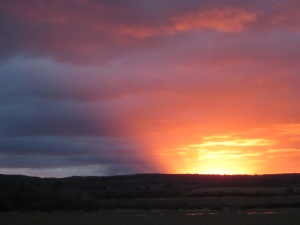 Sunsets that made me linger outdoors in the chilled air.

The whispering of the mud as the tide ebbed. The tiny twitterings and tickings of the mud as the falling water  exposed the burrowings of billions of creatures. And the light across the mud flats. And the sight of birds, and the sound of birds – the cries and the beat of wings. Eider, Shelduck, Greenshank, Sandpiper, Wigeon, Peewit, Smew, Whooper Swan  – and finally, calling the night down . . . the Curlew.

I once bred Beveren rabbits in all colours. Today, I'm an enameller who works with a kiln, fusing pictures in glass onto copper. On Amazon is my novel, 'Tom Fleck', set in the North of England of 1513 - the year of Flodden. A sequel to 'Tom Fleck' is 'The Black Caravel' published in 2016. My anthology of poems came out in 2015: 'Wandering About.' Recently I published memoirs of my time in the Merchant Navy: 'The Best of Days' and 'You'll See Wonders" I've a blog of poems, stories and art at: https://1513fusion.wordpress.com/
View all posts by Harry Nicholson →
This entry was posted in blog and tagged curlew, eider, kelp, Lindisfarne, mudflats, pale fronted brent, peewit, sandpiper, sea mark, smew, totem, waterfowl, whooper swan. Bookmark the permalink.

21 Responses to Calling the night down.