A new and second edition of my historical novel ‘Tom Fleck’ is now available on Amazon Createspace:
Amazon UK 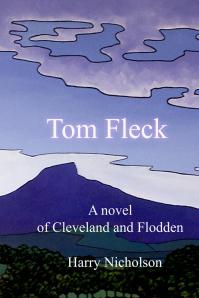 ‘Tom Fleck’
A novel of Cleveland and Flodden.

It is now listed on Amazon and elsewhere

‘Sharp as quivering hares are the Flecks. We’ve eyes and ears for things other folk miss.’

Much later, in the aftermath of Flodden, a young man finally understands his father’s words.

Tom Fleck, a downtrodden farm worker but gifted archer, yearns to escape his masters. He unearths two objects that could be keys to freedom: a torque of ancient gold and a Tudor seal ring. He cannot know how these finds will determine his future.

Rachel Coronel craves an end to her wanderings. When the torque comes to rest around the neck of this mysterious woman, an odyssey begins which draws Tom Fleck into borderlands of belief and race.

The seal ring propels Tom on a journey of self-knowledge that can only climax in another borderland – among the flowers and banners of Flodden Field.

To see if ‘Tom Fleck’ is the sort of story you would like to read, here is the opening chapter (my apologies for this site’s refusal to preserve indents):

Wings clattered through branches. A young man stayed his axe in mid-swing as two wood pigeons flung themselves into the mist. He looked down at the dog as her throat rumbled. She raised a paw, shot him a glance, then – ears cocked – faced back along the track. Metal clinked somewhere.
Tom Fleck whispered, ‘Hush now. Come away.’
Soft-footed, man and dog crept off the path and into a thicket to huddle together, among ferns and willow stems, as the crack of twigs grew louder and voices filtered through moss-coated trees.
‘It’s thinning. A wind’s sprung up.’ The helmeted man seemed a giant as he squelched past their hiding place. Two other burly men followed; all three wore green and white tunics. One of them groaned as his leg plunged into the mire. He wrested it free.
‘Shite! My boot’s full o’ clarts! How much more o’ this, Sarge?’
‘The river’s close I reckon.’ The giant paused. ‘Though it’s a few years since I enjoyed the charms of this path.’
Five more tunic-clad men pushed out of the mist; all had round shields on their backs and swords at their belts. They trudged alongside a pair of black horses; each horse carried a man cloaked in red. Three brown-smocked labourers, pulling on the ropes of pack-ponies, took up the rear. The column wound beneath dripping alder trees until halted by a fallen monster.
Tom tried to work out who they were. He’d seen that green and white before – at the manor house. It meant power that cared naught for the likes of him – power that could seize a man and take him away. In these times it made sense to hug the ground and just watch.
The giant raised an arm. ‘A dead wind-throw. She’s hacked about like someone’s been at her for kindling – I did hear an axe.’ Tom shrank lower as the seamed face looked around. ‘But we need to get on. We’ll work our way around her. Dobson, see to it nobody tumbles into that root-pit.’
Tom squinted through the sodden ferns. The shattered roots of the ancient alder reared above the strangers’ heads like the antlers of stags entangled in combat. Then the mass groaned as the trunk settled deeper into the mire. A horse snorted and shied away, the rider cursing as he clung on. Tom flinched as the mount staggered sideways off the track and sank onto its forelegs in the ooze. With gasps and snorts it heaved free, pitching the rider from the saddle. A pair of full-fleshed buttocks thudded into the mud.
‘God damn you, nag!’ The man clambered to his feet. He glowered at his stained breeches then punched the horse on the neck. ‘Blast you! You and this bloody bog . . .’ The reedy voice choked into a squeak.
His lean companion looked down from the saddle. ‘Hold yourself together, York. After the ford we’ll be on ground more to your comfort, and just two hours from the mattress you crave.’
Tom wrapped one hand around the dog’s muzzle and stroked her neck with the other. He watched two bearded men grin at each other as they splashed forward to grab the horse’s bridle. One shoved a biscuit under its nose while the other calmed the shivering beast and held it for the rider to remount. Back in the saddle the barrel-shaped man, face as red as his cloak, wiped his brow then yelped, ‘My ring! It’s gone from my hand! It’ll be in the mud. Find it! I’ll give a reward.’
The dog’s muffled snort went unheard amid laughs as soldiers’ fingers grubbed among the rushes. The pack-ponies stood in a line with heads drooped as their drivers squatted to chew on crusts, indifferent to the pony-dung that thudded around them. As the mist condensed into drizzle the two gentlemen pulled down their hats and moved to the shelter of a tree on drier ground. With their backs against the trunk they drew out corks and sipped from flasks. Tom caught the searchers’ low banter:
‘Yon will have a sore arse, he hit the deck like a sack of cabbage.’
‘He went down more like that feather-bed wench at the inn last night, when she skidded on your slopped ale.’
‘Hast’ seen his cacky bum?’
‘Get on with it, Jones.’ The giant spat, then growled, ‘And have a care – if York hears thee mock him, he’ll not forget.’
‘It should fetch a bit of coin, eh, Sarge? What’s the reward?’
‘Knowing him – a piss-pot of sour ale,’ someone cackled.
‘We’ll have to see. Now shut your gob, Bentley! Get cracking or we’ll be sleeping in this muck.’
Taking a final sip before pushing the stopper back into his flask, the lean gentleman called out, ‘Sergeant! Stop all that, it’s far too late, if we don’t make Norton before dark, we sleep rough. In an hour the tide runs up river and we’ve yet to ford the Tees. Two men will return at dawn to search again.’
‘Aye, sir.’ The giant snapped a branch off the fallen tree, broke it twice across his knee, and pushed the bits upright into the mud. He rubbed his big palms together. ‘That’s marked the spot, now let’s get shifted.’

Through the tracery of twigs, Tom Fleck’s keen eyes had also marked the spot. A shower of heavy drops, from the leaf canopy overhead, began to drum against his leather skullcap and the shoulders of his battered jerkin, but he did not move. Midges were becoming lost in his young beard; he scratched at the itches but stayed crouched. When the last pony had faded into the gloom, he listened on. After a few minutes the agitated tew-tew . . . pity me . . . pity me . . . cries of the pair of sandpipers that nested on the riverbank told him the travellers had reached the ford.
At a snort from the dog he took his hand from around her jaws. ‘They’re away now, Meg – whoever they were. Stay hushed while we see what might be sniffed out yonder. Come on.’
He scanned the flattened bog plants mangled by boots and hooves, then the bruised earth, until he became aware of a hollow. Shaped by a beefy backside, he thought – so one stride away is where the rider’s hands would grab the ground to crawl back onto the track.
Stretching out an arm, he snapped his fingers. ‘Seek!’
The little black mongrel rushed to the spot, tail wagging in a blur. She circled a few times, nostrils sweeping the ground. She stopped, lifted a paw, stiffened her tail, pointed her nose close to the earth, and let out a whine.
‘Shift,’ he whispered and pushed her snout away to rake his fingers among the roots. They closed on a hard, round shape. He wiped the lump on his sleeve, held it up and saw a golden gleam. Trembling, he looked around, but the vague shape of a night screecher, perched on a high branch, made the sole witness. The owl bobbed its head a few times then launched on silent wings deeper into the trees.
He dropped the object into his skin bag, safe among the moss that wrapped a clutch of mallard eggs. The dog’s ears got a quick rub before he slipped the axe into his belt, picked up a bundle of firewood and heaved it across his shoulders.
‘Right, let’s away for our supper.’

The milking would take an hour. He washed and dried the udder of the first cow. Seated on a stool he rested his forehead against her warm flank and wrapped his fingers around just two of the four teats; the other two quarters were for her calf. He drew down the milk with a steady rhythm, first on one teat and then on the other. Squirt, splash, squirt, splash – the milk spurted into the wooden bucket. The smell of cow hair, mixed with the vapour of foaming milk, drifted around his face. After humming for a while, he sang in a lilting voice:

‘I cannot get to me lass
her freckles to see,
for the flood o’ the Tees
gans between her and me.

I maun wait on the moon
when the heron gans yem,
and the shiv’ring salmon
has done her last run.

When the watter o’ the wath
drains down to the sea,
then I’ll sharp gan across
and she’ll sit on me knee.

We’ll sing the words fluted
since Adam was born,
like the coo o’ the cushat
from yonder blackthorn.’

After bolting the rest of his food he pulled on a tattered cape. ‘I’m off out for an hour. I’ve one or two things to see to. Meg – you stay here.’
He ducked out into the drizzle and hurried downhill towards a cottage a half-mile distant.

The story opens in a wooded marsh on the Yorkshire bank of the river Tees. The location is now buried beneath main roads and housing estates.

54 Responses to A Tudor Novel