Eskdale. A walk in the woods of Autumn.

Posted on November 4, 2020 by Harry Nicholson

I walked here for renewal.

A joy of flowers at this nature reserve today (6th August 2021).

From Butterfly Conservation Yorkshire: Ellerburn Bank is a 3 ha. grassland site sloping south-east on oolitic limestone on the southern edge of the North York Moors near Pickering. Despite its modest size, it is one of the most extensive areas of unimproved limestone grassland remaining in the North York Moors . It was notified as a SSSI in 1983 and has been managed as a nature reserve by the Yorkshire Wildlife Trust (YWT) since 1966, having been informally managed for nature conservation perhaps for the previous decade. The flora and fauna of the site is exceptional for the region, with over 150 species of plant recorded including large displays of Cowslip in spring, orchids in early summer and Gentians in late summer . Flowering plants of regional note include Dropwort, Woolly Thistle, Saw-wort, Fly Orchid Ophrys and Greater Butterfly Orchid. The site is noted for its extensive Lepidoptera fauna , including butterflies of regional note such as Dark Green Fritillary and Dingy Skipper Erynnis tages, and the site also supports a population of Glow-worm Lampyris noctiluca. Management of the reserve currently consists of low-intensity winter grazing by Hebridean sheep and rotational scrub clearance.

Glorious sun and still air on this last day of February 2021. Went to the moor to hear skylark, red grouse, peewits and pipits. Took some pictures. 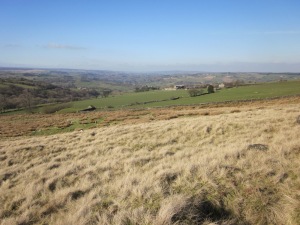 Posted on September 15, 2020 by Harry Nicholson

My latest book appeared on Amazon on Sunday. The title comes from advice given when I went to sea: brother-in-law, an engineer with Elder Dempster, cautioned me to never be cynical – ‘You’ll see wonders’, he said. ‘You’ll See Wonders’ is the sequel to my first memoir, ‘The Best of Days’. It has been a pleasurable two years in the writing, and I’ve enjoyed trying to write with the spirit and atmosphere of the time. It is not autobiography, but memoir – which allows for scenes and character to be built where memory gives only snatches and fragments of conversation and visual recall of sixty years ago. I’m now cogitating around a possible book 3, whilst Pieris rapae is out there, in the sunshine, laying her little lime-green eggs on my cabbages. The cover of “You’ll See Wonders” is from one of the last paintings by my old friend and venerable man of the sea, Bill Wedgwood of Robin Hood’s Bay – he did it for the book. Though he did not see it finished, I passed him chapters as they emerged.

https://www.amazon.co.uk/Best-Days-memoir-sea/dp/1981922954/ref=sxts_sxwds-bia-wc-drs1_0?cv_ct_cx=best+of+days&dchild=1&keywords=best+of+days&pd_rd_i=1981922954&pd_rd_r=d1757d8b-8f3d-469a-a802-8b0b0f17d564&pd_rd_w=kPsgm&pd_rd_wg=XRxlX&pf_rd_p=3bc9f5f9-9cd9-4de8-b98a-8830064f6b96&pf_rd_r=TYWSNPABVNJBBZ2WVWDN&psc=1&qid=1594806953&s=books&sr=1-1-95fb4f3c-fa15-48dc-bab1-67b29ab0ca13
Worldometer says that 3,297 book titles have been published so far today. An independent author can be lost in this ocean of books. From time to time my memoir ‘The Best of Days’ pops to the surface with another review. The most recent is cheering: By Dafydd — Captivating stories 13 July 2020
I will admit to a bias, as I count the author as a good friend, but knowing him only adds to the richness of a memoir that I believe anyone would find enthralling. A natural as well as highly skilled story-teller, Harry begins by rooting his life in his family history, back to World War I in which his father fought and even earlier, as well as, very distinctly, place: the North East of England. Readers of the author’s poems will know how well he can convey such deep context and community history, and how much it means to him. Without a flicker of sentimentality, he paints a vivid picture of hard lives, not to mention great loss, that produced sharp-witted and colourful characters, in days when not all homes had electricity and a family’s stock of coal was supplemented by spillage gleaned from the beach. Harry’s own childhood was spent among the privations of World War II – nevertheless his fondness for the earthy excitement of those years, and the love of nature he gained, is movingly clear.

His early fascination with the sea, growing up beside it, is also evident, and the bulk of the book tells of his first career sailing on it as a radio officer in the merchant navy. When he begins relating this part of his life, you realise that no one can quite tell a sea story like Harry Nicholson. Only 17 when he joined up, even his first few months voyaging between the world’s ports with the widest possible variety of companions, clearly revealed to this curious and capable young man a lifetime’s worth of experience – and, luckily for us, of memories. From the edgy comedy of a drunken captain and his life-threatening decisions, through a spicy initiation in a Japanese port, via disasters and threats that constantly remind us of the dangers of the sea, Harry ethralls us, moves us, entertains us, and never once overstays his welcome. His stories are crisply and vividly told, with a perfect eye for telling detail, wry observation of character, incisive humour and – memorably – unshowy compassion for the wide variety of human beings he meets, of all stations of life, and so many cultures. Perhaps the most haunting story of all is that of the SS Minocher Cowasjee, whose Morse distress signals Harry has to listen to, helplessly, across hundreds of miles of ocean. But perhaps the most touching is that of the vivacious blue-eyed girl that Harry meets at a dance, on shore leave, at home, and the perils of absence their relationship faces – a thread that weaves its way among all the more exotic tales, while being no less captivating for that.

The Saga of the Vyner Brooke

Take this away, Harry. Borrow it for a while. It’s written by my uncle. Tell me what you think of it.’
We face each other across the little lounge of his retirement bungalow in Skelton-in-Cleveland, ten miles from Middlesbrough. I can hear the lifetime of hard work in my old friend’s rich, slow voice. A strong voice, and a forthright one. No beating about the bush with John Pickard, former Merchant Navy second mate, Teesport cargo supervisor, and shop stewards’ convenor. He hands me a tired brown paper folder, its edges curled and brittle. His large knuckles are in keeping with the rest of his tall and rangy form.
An intelligent hand has penned confident words across the cover, in the previous generation’s flourishes:
2nd August 1979. From Mrs N Pickard, 1 Mill Rd, Burnham-on Crouch, Essex. ‘One Jump Ahead’. Yet another escape from Singapore. Set down 10 years after by Lieutenant A J Mann RNVR.
I look up at John; his blue eyes twinkle. ‘Mam sent me that about twenty years back; she’s getting on, though you’d hardly know it. Nearly a hundred, but still fights her corner — and mine. She’s been harassing the housing people up here, wanting to know why they can’t provide her son with better accommodation.
Once back home in Sleights, fascinated, I feel reverence as I dip into A J Mann’s manuscript. The fragile ninety pages of yellowed foolscap and faded typing executed in 1952, probably on an upright Underwood typewriter, amount to about 30,000 words. My immediate thought is that the story should be better known. This memoir of astonishing tenacity for life, of an overcrowded ship, it’s passengers in terror of a cruel foe, and of endurance before the Japanese advance through the islands of the Dutch East Indies, must not be lost. My wife, Beryl Nicholson, types the manuscript into digital form so that copies can be lodged with The Imperial War Museum in Britain and with the Australian Memorial archives.
Then began research into Lt Mann’s career at sea, and into his ordeal following the loss of Vyner Brooke, his survival and subsequent adventures. His story is now published as “One Jump Ahead” under the name A J Mann with myself as editor and second author. The original foolscap manuscript will be lodged with the Australian War Memorial.

Posted on October 4, 2019 by Harry Nicholson

Swans out of the north,

lanced uhlans in flight from a broken field.

across the pasture – another drop

Smoke columns lean along the moor,

crackles and flying embers at their feet,

It is the autumn burning – new shoots

for next year’s grouse – while emperors

The glow of berried rowans on the heathered edge,

the lips of kissed and long-forgotten girls.

It’s a painted lady year in Eskdale. She’s arrived from the fringe of the Sahara in large numbers. She’ll breed here, then her children will return to North Africa without map or satnav. Had a stroll around our small garden and counted ten, fuelling up on valerian flowers. Also two Red Admirals stayed a while.

Not to be outdone by the lepidoptera, a French Partridge spent a half hour on the lawn. They’re bred for shooting, but three have found sanctuary with us since last autumn. They pick around beneath the bird feeders when the goldfinches are feasting and throwing sunflower seed around as if it came free. 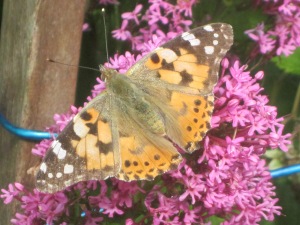 The Garden of Karma

Rain tomorrow they say, but sun today.
Set the courgette plants out, four in a row.
Cherish the exercise, bend and stoop,
Ease them in, add a copper loop
To baffle the molluscs. Then splat . . .
A slap on the neck like a wet dish cloth
Some malevolent bird, out of spite
Has voided its bowels from a great height,
Down my shirt runs a river of (insert suitable rhyme).
I’ve fed them through hard times for years,
Subscribed to the RSPB, donated to clear
Bird islands of the shipwrecked rat.
Be this a karmic consequence of that?
It must be some older sin that stalks
Down the years, from a former life:
When I slew the last dodo with my knife,
Or when, from the deck of the Dutchman,
I shot the wanderer down.
This voided white dross
Is neither robin nor thrush,
But the final salute of the albatross.

I’m concerned about the black hole recently photographed – I’ve just planted my first early potatoes. I’m always anxious about singularities and such. Some years ago I was moved to compose this:
FIFTEEN POINTS FOR THE END OF THE UNIVERSE

How would it be if all this collapsed into a singularity?
Will W.B. Yeats’ tombstone be ripped from the Sligo earth to whirl through time into unspeakably compressed blackness, calling out as it goes:
“Cast a cold Eye
On Life, on Death.
Horseman pass by.”

The lines of migrating geese, where would they go in Autumn?

Will there be puffs of smoke from the Vatican? And what colour will they be?

When God rings up, who will answer the phone?

Will it ring in the Vatican or on the Rabbi’s desk in Jerusalem?
Or will some mullah break off in mid rant to grab his mobile?

Will that funny black thing in Mecca begin to speak and will it say:
“I’ve been out to lunch, is something happening?”

What would happen to the Queen’s underclothes, hung out to dry, on lines, in secret places?

Should we put the jam in the fridge and give a final check to the humane mouse traps?

Should we have a bell five minutes beforehand, and after we have eaten all the chocolate?

Would Tony Blair speak unto us one last sound-bite, telling us “it will all turn out for the best“?

Would the Americans switch off the lights?

Will we be interested when the missing weapons of mass destruction start going off, deep in caves in the Hindu Kush?

What will be the last poem? Will it be any good?

And how will the ewe, down by the loch, find her lamb?
Harry Nicholson June 2004 Loch Voil